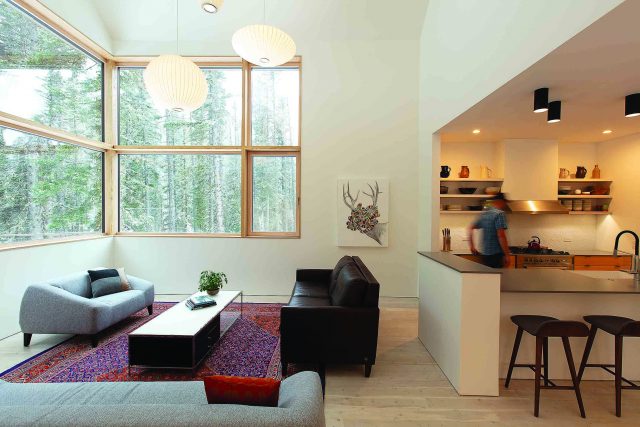 Upon entering the home of architect Jonah Stanford, something immediately stands out. It registers first as a feeling, a shift in one’s perception of “houseness.” Part of it has to do with the home’s constant, comfortable temperature, even on a warm day. Part of it has to do with the 2,400-square-foot home’s luxurious silence, even in the context of an urban infill neighborhood south of downtown Santa Fe. Part of it is the home’s commodiousness, even given its tidy, excess-free floor plan. Mostly, it’s the combination of these.

Built in 2011, Stanford’s home is the first Passive House in New Mexico, designed to the exacting performance metrics initially defined in the late 1980s by a German physicist and Swedish scientist. Passive Houses are not passive solar constructions, but houses that require very little active energy to power. They are built with specific window types, energy systems, and super insulation, among other factors, that in combination produce a low-energy-consuming structure for secure and comfortable living, even in extreme climates. While Passive House standards are highly technical, what results from their calculations and considerations are simple, efficient, and high-performance buildings. While one might not know through any obvious means that one is inside a Passive House, one can feel the effects of its extensive insulation, air freshness, and high-performance glazings, the last of which are fashioned to thwart heat transfer.

The Shoofly Street home where Stanford and his family live also features his particular brand of rigorously edited design. Stanford’s credo is to provide exactly what the homeowner needs and leave the rest on the cutting room floor. It is from this orientation that he named his custom home design firm Needbased.

Stanford grew up in Colorado’s Uncompahgre Wilderness and spent time working with his father on the family’s hand-built wood cabin and exploring the woods. He possesses a deep and abiding love for the natural world and has long been attracted to rural building forms. While he understands that energy-efficient, single- and multifamily infill solutions have the greatest capacity to make a significant environmental impact and is currently working on many such urban projects, his love for the natural world gives him a penchant to design modern-day, energy-efficient vernacular cabins perched in natural settings, several of which have been recently completed or are in the process of being built.

At 6 feet 4 inches tall, Jonah Stanford is an imposing man, and perhaps it is because of his height that the ceilings in most of the houses he designs are at least ten feet tall, though some of the ceilings in upper-story rooms slope. This registers as a sense of spaciousness in his buildings, even within fairly tight footprints.

Stanford first learned about Passive Houses through training he took in 2008 while working at Homewise as a project manager, which he says was pivotal. “I learned to design from the outside in rather than from the inside out,” he explains, referring to the fact that the construction of a home’s thermal mass is one of the most critical aspects of energy efficiency. By 2009, he’d found a zeal and dedication to designing super-energy-efficient houses on a full-time basis, leaving behind the safety net of a steadier paycheck. “I’m really grateful for that moment in my life,” he says. “Homewise paid for me to go to one of the first Passive House trainings in the US and then I was pushed out of the nest. It was a game changer. I knew what I had to do from that day forward.”

In his 18 years in practice, Stanford has designed approximately 60 buildings, many of which have the tight Passive House materials and standards that allow for extraordinary energy efficiency—whether or not his clients have asked for them. Whereas most conventional houses are designed with much lower thermal mass standards, Passive Houses have much higher performance metrics, or R-values, to which they must adhere. Northern New Mexico Passive House walls are built to a value of R-55 to R-60, roofs to a value of R-90 to R-100, and sub-slab insulation to a value of R-25 to R-30. Conventional building insulation standards are often a third to half of these values, allowing significant temperature leakage through their envelopes. Add to these the Passive House standards of triple-glazed windows that deflect unwanted heat gain and specialized, imported tape to seal these windows, and one starts to appreciate how Passive Houses create an efficient container that consumes about 90% less energy than neighboring, standard-built homes.

Aside from his custom home design practice, Stanford recently formed a new company, B.Public, with his wife, Edie Dillman, and Charlotte Lagarde. Dillman has long worked in the areas of management, strategy, and partnership creation in various design-based for-profit and nonprofit entities and is, for the first time, professionally joining her husband of around two decades. When asked why now, Dillman says that, while she initially tried, she just could not resist the opportunity.

While Stanford’s Needbased firm designs custom homes for clients with the means to commission them, B.Public is a B corporation that requires performance to a triple bottom line of environmental, social, and economic impact. To do so, the company has fashioned a kit of parts to create site-built homes at a lower cost.

The underpinning of B.Public’s product offering is a series of about 13 standardized building components—walls, roof sections, floors, windows, and doors—that are prefabricated to exacting environmental and thermal mass standards off site and configured like building blocks that can be rearranged, streamlining both the design and construction phases and significantly lowering design costs and construction risks. B.Public’s design process also enables Stanford and Dillman to present clients with a quick and precise cost estimate immediately upon completion of the design due to their understanding of the material and shipping costs of each component.

“These modular systems break a broken system down and work on so many different levels,” says Dillman. “From the choice of materials to the price points to producing highly performing buildings for more people to enjoy and benefit from, to doing something more for the environment—there were so many ways in which every aspect of this offering appealed to me. I couldn’t stay out of it.”

Stanford understands that the time for cautious energy planning has come and gone, and that we are no longer heading toward a state of full-on environmental crisis; we’re in it. “We know how much climate change is affected by the running of homes,” Stanford says. “These technologies need to be offered on a larger scale to more people. We need to look at reduction and accessibility in order to move the needle. We have known for a while that prefabrication can be very economical,” he continues. “What we are trying to do with B.Public and its prefabricated components is produce high-performance buildings that reduce material consumption and consider long-term lifecycles at an accessible cost. There is currently a huge demographic of people who are being left out of this conversation. That is what we are trying to change.”

Even though the components of B.Public houses may be standardized, the siting of each home is decidedly not. Customized site planning remains an element of the design process that Stanford feels is essential to the effective life span of any home. “Designing a site-specific house is a quality of life issue,” Stanford says. “It’s a critical aspect of the quality and performance of a home.” While Stanford was designing a Taos Ski Valley cabin for Kate Ferlic and Chris Stanek, for example, Ferlic would sometimes visit the as-yet-undeveloped site and find Stanford on top of a ladder sunk into a pile of dirt, figuring out where to place windows to leverage the most satisfying views.

Says Ferlic, a self-described “design junkie” who codesigned several elements of her home with Stanford, “What you notice about Jonah’s buildings is that they always feel appropriate to the place. He puts a lot of work into that component of his designs, and you feel it once the houses are built. They are exactly on the spot that they should be, oriented in exactly the right direction, with windows that open to exactly the right views while maintaining a sense of privacy for the inhabitants and their neighbors. It’s such a specific calibration, and he does it so well.”

While Ferlic’s home is a custom design through Stanford’s Needbased practice, and thereby on the higher end of his typical budget spectrum, B.Public’s modules similarly allow Stanford to design and assemble the specific homes that his clients request, adding very little that is ancillary to those needs. What appeals to him most about the B.Public offering is how well the modular system simplifies the critical aspects of home design so that the buildings become “much more economically digestible.”

“We all feel like we have a moral obligation to try to change things at this stage in our lives,” Dillman reflects. Summing up both his professional and personal philosophies Stanford adds, “What I really want to do is be helpful. Because if you are not being helpful, what are you being?”

FUNCTIONAL DESIGN FOR A NEW ERA