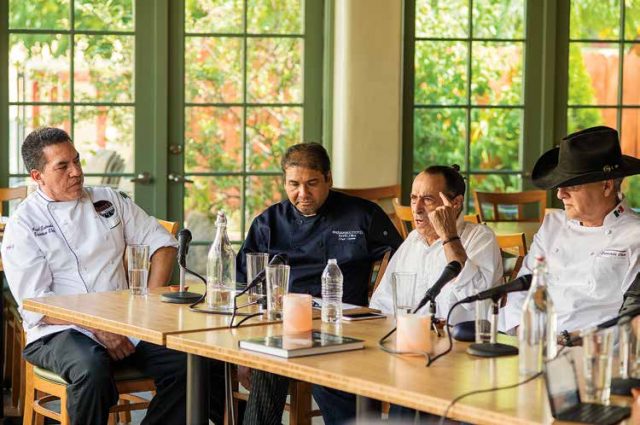 In Marcel Proust’s famous novel Remembrance of Things Past, the author expounded on the concept of involuntary memory and how a simple aroma or flavor can trigger a cascade of recollections and long-buried feelings. There’s a scientific explanation for that, but the complex workings of such ephemera as the brain’s olfactory system, gustatory cortex, and amygdala don’t really excite the imagination. What matters more is how our earliest food memories inform our current tastes and preferences, and how our concomitant memories of family and friends enhance the experience,   through time and space to a place where the conscious mind rarely ventures.

At the latest session of Trend’s ongoing Chefs’ Roundtables, publisher Cynthia Canyon assembled a group of noted Santa Fe chefs to discuss their early memories of food and how these have affected their careers. The conversation, moderated by former caterer and restaurateur Ric Lum, ranged from childhood recollections to general observations on the life of a chef and the current state of the restaurant business. Following are some highlights from that discussion:

“I grew up with home cooks,” says Martín Ríos, owner-chef of Restaurant Martín where, with his wife, Jennifer, he cooks up elegant but accessible “progressive American cuisine.” Born in Guadalajara, Mexico, Ríos came to Santa Fe as a teenager, but he still remembers the flavors and aromas of his childhood. “My grandmother had a restaurant at San Juan de Dios market, and my grandfather had a candy shop right next to her. We’d go to the different booths to get the ingredients for the restaurant—the live chickens were in a cage and they’d butcher them right there,” he recalls.

“When my grandmother couldn’t do it any longer she gave the restaurant to my mom, and my sisters and brothers and I helped her. So I started to understand about my heritage, Mexican food. I also learned about it from being at home; the Mexican tradition is that the family always sits down together for breakfast, lunch, and dinner, and you all talk about your day.” Ríos cites two of his favorite childhood dishes, milk gelatin, which his mother still makes for him on his birthday, and sopes, thin, shallow shells of dough fried crisp and topped with vegetables and meats. These have found their way onto his restaurant’s menu in the form of panna cotta instead of milk gelatin and a lunch special of sopes made more elegant by stuffing them with pork belly or short ribs rather than beans and rice.

Chef John Rivera Sedlar is a New Mexico native whose family is from Abiquiu. His restaurant, Eloisa, is named for his grandmother, who first taught him to cook. “She could work a woodstove and a griddle,” Sedlar says, “and used products from local orchards and farms.” His menu is a contemporary interpretation of traditional Northern New Mexico cuisine, offering dishes like duck enfrijolada, a confit of duck served with blue corn tortillas and Cabernet-chile sauce. He also offers a five course tasting menu that pays tribute to Georgia O’Keeffe through his evocation of the flavors and smells of Abiquiu. “The first course is mainly aromatic and visual,” Sedlar explains. “It’s nine small plates of aromatics and things that are part of the environment, like chamisa or Russian sage.

You don’t eat it, but it conjures that area. [To evoke] O’Keeffe’s take on red poppies, we ask the guests to close their eyes and sniff, and they can smell the color red. We use various chiles and local apricots to transport you there.”

Executive Chef Ángel Estrada, who helms the kitchen at Midtown Bistro, grew up in Chihuahua, Mexico, and moved here when he was 16. “I was inspired by my mother’s and grandmother’s cooking,” he says. “I’m the oldest of eight kids, so I used to cook for my little brothers and sisters.” While he retains the memories of the flavors of his youth, he currently prepares food inspired by “a little bit of everything.
I do Spanish, French, Italian—however I can please my customers.” His Mexican touches are minimal, but dishes like roasted corn and potato bisque, or calabacitas with fried leeks and basil pesto, attest to his knack for subtly incorporating his early influences into an appealingly pan-global fusion cuisine.

Mexican dishes take center stage at Sazón, where Chef Fernando Olea, a native of Mexico City, introduces diners to the sophistication and complexity of true Mexican cooking. “I didn’t like to eat anything until I was around nine years old,” he confesses. “I thought food was the most horrible punishment you could give to a child. But one day I woke up and I loved food. I remember sitting in the kitchen, doing my homework amid the aromas of chiles, salsa, salchicha [sausage], tomatillos.” Olea recalls his mother fixing bacalao a la vizcaína (Biscay-style codfish) at Christmas, and taking trips with his grandmother to Puebla, where he first enjoyed mole poblano. “We also ate a lot of lamb barbacoa [barbecue]

that they’d cook all night, wrapped in agave leaves, in a pit.” At Sazón, Olea prepares unusual Mexican delicacies like corn truffles served over mini-tortillas with exotic spices and asadero cheese, and even taquitos of baby grasshoppers with avocado sour cream—as authentic as the more familiar Mexican fare but with a far more complex flavor profile.

“There’s a dicho [saying] in Mexico that goes, ‘You don’t find mezcal, it finds you,’” says Ron Cooper, the acclaimed artist and motorcycle aficionado who founded his company, Del Maguey, in 1995 to bring artisanal mezcal to discriminating palates. His efforts have been recognized by the James Beard Foundation, which named him Outstanding Wine, Beer, or Spirits Professional for 2016. Having been “found” by mescal a number of years ago, Cooper treks to remote villages in the Mexican highlands to work closely with craft distillers who follow the procedures of their ancestors, making like a fine cognac. While Cooper’s earliest food memories from his childhood in Ojai, California, involved standard American fare like pizza and Foster Freeze ice cream, he also used to visit a little shack where Angie, the proprietor, served up delicious  tacos and menudo. Thus began his affinity for Mexican food, for Mexican food, laying the groundwork for his obsession with mezcal to emerge decades hence. Regarding taste memory, he says, “I’ll taste a new mezcal twice a year for five years, and if I don’t have a taste memory of it after that, I won’t buy it. It’s such a gift to be able to remember a great flavor.”

At Geronimo, Executive Chef Sllin Cruz continues the late Eric DiStefano’s sophisticated approach to fusion cuisine by retaining the menu favorites while introducing his own flair to the mix with dishes like garbanzo bean and eggplant croquette accompanied by Italian squash ratatouille, crispy artichoke hearts, and Romesco sauce. “I’m originally from Michoacán, Mexico, one of 12 kids,” he says. “I moved to America when I was 13, first to Oregon, then Salt Lake City, and started cooking. I’m from a very small village, and calabacitas. I don’t eat much Mexican food now, mostly when I visit my mom in Mexico. My style is a little different, more French and Italian, but I remember all of us sitting at the table and enjoying beans, chile, and tortillas.” Still, when he goes out he likes to eat tacos, or mole at Sazón. “It’s not what I cook, but it’s about memories of my childhood.”

Food traditions from childhood are indeed a powerful influence for chefs and home cooks alike, evoking memories at once personal and with cultural reference points and unforgettable flavors.
¡Buen provecho!

PASSION OF THE PALATE: New Frontiers

PASSION OF THE PALATE: Down the Hatch | Raising the Bar | The art and craft of cocktail culture

All Hail the Green Chile Cheeseburger!