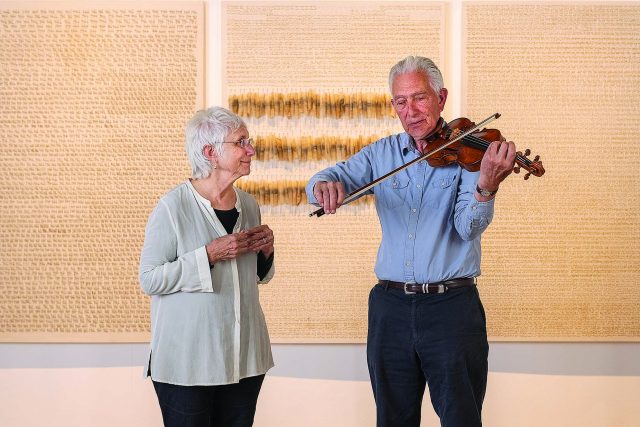 When you meet Judy Tuwaletstiwa for the first time, you immediately want her to be your new best friend. Her gentle presence, her wisdom and compassion—they all weave a spell that wraps you in a shroud of intimacy, as if you’re the only two people in the world.

This ability to make instant and meaningful connections with people is both a talent and a curse for the Galisteo-based artist, although she’s not likely to see it that way. Tuwaletstiwa, an energetic 78-year-old, is nothing if not accessible, and she brings everything she’s learned over the course of her life to every encounter and project, reveling in the possibilities of the present while opening herself up to the upheavals of the past as well as the stirrings of a future yet unknown. That essential integration of living, creating, and knowing is a power- fully seductive force, and it attracts people who enjoy just being around her, often without knowing exactly why. And even without ever seeing her work or understanding what drives her, they know instinctively that they’re in the presence of a consummate artist.

Working in a variety of media—textiles, glass, acrylics, found objects, and more—Tuwa- letstiwa brings an open heart and an outsized talent to her many projects, including several books that combine her images and words to create a stunning visual poetry. She distills her materials down to their essence with such a subtle hand that viewers are inclined to linger with the work to fully absorb the messages. Even her most far-reaching artistic statements are rendered so simply that the viewer is led gently to the understanding of the complex thoughts and feelings revealed via her deceptively minimalist approach.

Oddly enough, Tuwaletstiwa didn’t even realize she was an artist until she was almost 30 years old. Growing up in East Los Angeles during the 1940s and ’50s in a multicultural en- vironment, she enjoyed a childhood rich with intellectual stimulation amid genteel poverty. She went on to attend University of California–Berkeley, where she received her bachelor’s degree in comparative literature, then Harvard, where she got her master’s degree in teach- ing literature. “I came out of a household that was extremely articulate, a Jewish intellectual family where you had to be well spoken,” she says. It seemed she was destined for a career in letters, but it turned out that life had other plans for her.

Tuwaletstiwa had always enjoyed handicrafts, but she still hadn’t recognized herself as an artist, concentrating instead on raising her three young boys (a daughter came later). Then one day, while living in the Bay Area with her first husband, she hired a babysitter and took the afternoon off to visit a Van Gogh exhibition at the old de Young Museum in San Francisco. “The show was chronological,” she recalls, “so I started at the beginning, then walked through and went deeper and deeper into Van Gogh’s mind. When I reached Wheatfield With Crows, I simply started crying and couldn’t stop. Even as I drove home, I just cried and cried.”

As soon as she reached her house, she put the kids to bed, tore off a piece of mat board, and made a pencil drawing of a tree that was a little bit reminiscent of Van Gogh. “I hadn’t drawn since I was 11, when a teacher told me I was no good,” she says with a laugh. “I start- ed doing my art because Van Gogh’s painting broke my heart open and gave me a glimpse of what was possible. A door had been opened, an amazing door, and I had to work with that moment. There was no way not to do art then. And the art has been an expression that has allowed me to go deeper and deeper into my own woundedness, through my hands, through my heart, through color, through form, through the power of the image to heal. It’s not that I expect my brokenness to go away—it’s about being able to live with it in a way that is healing.”

Tuwaletstiwa began schooling herself in earnest, studying the works of great painters, but she was less concerned with technique than with the materials and emotional depths that gave the works life. “I study all the works of artists I feel strongly about,” she ex- plains, “but it’s usually their final works, those last 15 to 20 years, where there’s a transformation. What I find in their work is not a truth that I want to put into words, but it touches a part of my heart that transforms how I see, that transforms me as an artist.”

She progressed from pencil drawings to using ink on rough wa- tercolor paper, darkening it in so that the spaces in between became the drawings. “I also took a silk-screening class at the community college, but I didn’t start painting yet. I needed to be more present to do that.”

Tuwaletstiwa then moved with her family to Edinburgh, Scotland, and her trajectory as an artist took on another dimension. “I had this fantasy that I was going to learn how to weave from some little old lady in a cottage,” she recalls with a smile. “Instead, I found Ar- chie Brennan, a master tapestry weaver at the Dovecot Studios who was teaching a night class, and I signed up for it. Archie taught me about what he called the integrity of weaving, explaining, ‘When you lay in a line, never take it out. It’s just like yesterday—you can’t undo what happened yesterday, so you change it by what you put in  above it.’ When I started weaving tapestry, that changed the world for me—the texture, the language, going line by line, just like writing.”

She was entranced by the process, which she found re- markable in its ability to calm the mind and heart. “It’s when I started working with fiber that my world opened to me as an artist. It’s so ancient, so simple,” she points out. “In and out, in and out. That’s the thing about my work—I don’t use fancy techniques because I’m not interested in them.”

Tuwaletstiwa continues to find inspiration in her materials—natural substances ranging from seeds and nests and pebbles to sand and paper and twigs. All materials have their own rhythm, their own language, she says, and she lets the substances lead her with their individual voices. “Our first language is the rhythmic beating of our mother’s heart,” she explains. “We know all kinds of cacophonous sounds that are going on in our mother’s body, but it’s that heartbeat that is the constant.

“The second language is our mother’s touch, and that’s equated with love and safety—that’s what holds us,” she con- tinues. “If you look at weavings from cultures that don’t have a written language, it’s all about rhythm and texture. It’s true for every human being; it’s the one thing that that unites us all. I think when we get too far away from that, from the texture and that rhythmic beat, we lose ourselves.

Perhaps that’s why m aterials are so important to me—the rhythm of making glass, the rhythm of weaving. I’ve hung on to the fibers I’ve collected over the years, hoping that one day they would speak, that these different materials, whose languages spoke to me at the times I worked with them, would speak again and have a conversation with each other in a way that I could never have imagined.”

Tuwaletstiwa’s next opportunity to expand her vision came in 1993 when she went to live at Hopi with her second husband, Phillip Tuwaletstiwa, a geographer and Hopi native who was working with the US Geological Sur- vey to map the region and help the Hopi people protect their lands. The couple spent 12 years there, and it was during that time that Tuwaletstiwa began working with sand. “It was the most abundant material,” she points out, “and from the sand eventually the concept of glass came to me, as it’s made from sand. At Hopi my work became less narrative and more what would be called abstract, although that’s not the word I use. I say ‘essential.’ I’ve always been reaching toward the essence of things.”

The couple moved to their current home in Galisteo in 2005, having fallen in love with the village when Tuwaletstiwa was showing her work at Linda Durham’s gallery there. She continued to collect colored sands, working at the kiln in her studio to fire them into glass “paper” that