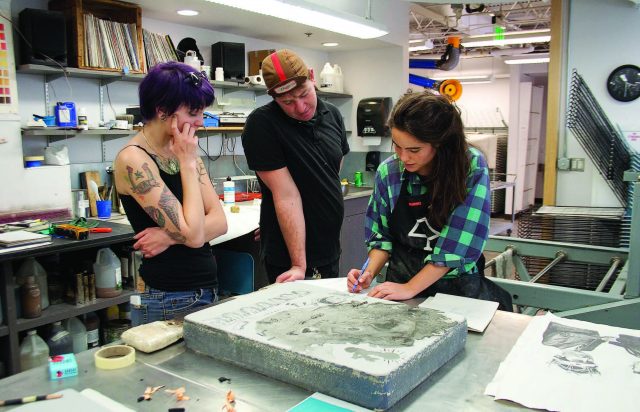 JUDY CHICAGO. FRITZ SCHOLDER. BILLY AL BENGSTON. These are just three of the high-profile artists who have passed through the Tamarind Institute’s doors over the past 60 years. In 2020, the illustrious printmaking workshop is marking its diamond anniversary, albeit amid the emergence of COVID-19. Tamarind, however, is no stranger to reinvention or putting heads together for a better solution.

In 1960, founding director June Wayne created the Tamarind Lithography Workshop in Los Angeles to rescue the dying art of lithography. The name hailed from the street Wayne lived on in Hollywood. Current director Diana Gaston says Wayne was fond of saying, “If we’re successful in our undertaking, the name Tamarind will come to mean something. If we’re not successful in this venture, it will just be my address.” Tamarind has indeed come to mean something in the world of lithography. After its LA birth in 1970, it moved to Albuquerque, where it has since been under the umbrella of the University of New Mexico. At UNM, Clinton Adams, the first associate director, and Garo Antreasian, the first technical director, established a rich ecosystem of Contemporary artists, printers, and an engaged public. Since its beginnings, Tamarind has amassed a thousands-strong print inventory housed at the UNM Art Museum and trained a fleet of master printers from around the globe, some of whom have returned home to establish their own workshops, including influential printers such as Ken Tyler, Irwin Hollander, and Judith Solodkin.

“Lithography is the medium we use, but the approach we take is one of collaboration,” Gaston says. “Artist and printer come to the project together, with the printer offering technical expertise and guidance and serving as a conceptual sounding board, and the artist bringing ideas and imagery.”

Corrales, New Mexico–based painter Jaune Quick-to-See Smith has been printing with Tamarind since the 1970s. “They make suggestions. You can use them or not, often I do because that’s the medium they work in,” she says. “It’s making art by committee. It’s teamwork, and that process either appeals or not. I like it.” Usually working elbow-to-elbow with the master printers and students in the workshop, Quick-to-See Smith drew on a stone delivered to her doorstep and proofed remotely in early summer 2020.

Quick-to-See Smith’s work represents a trend Tamarind hopes to cement moving forward. “Tamarind has a great history of working with international artists,” Gaston says. “We’ve also in the last few years been focusing on artists here in New Mexico. Native American and Latinx artists here are a priority for us. I want to maintain our original focus around diversity—of artists, printers, and stylistic approaches.”

Gaston also observes that Quick-to-See Smith’s work-from-home approach may become more common as the workshop finds new ways to produce amid social distancing concerns—and considers how it can reinvent the gallery experience for collectors, a key support for the nonprofit organization. “We trying to transform how we show art and communicate about it online,” Gaston says.

Recipient of a 2020 Frederick Hammersley Artist Residency, Ellen Lesperance will be working in-house most of July and August. The artist, based in Portland, Oregon, says, “Tamarind is an incredible printmaking facility. I jumped at the chance to do the artist residency.” She’ll be making lithographs for the first time and hopes to create a matrix of the textile-inspired mark-making. “I’m hoping it allows me space to experiment with color in a way I can’t do in my own practice,” she says.

Although COVID-19 waylaid some of Tamarind’s 2020 celebratory plans, it’s moving ahead with a retrospective show, Land of Mañana: 60 Years of Innovation at Tamarind Institute, running August 11 to December 12. The title plays off a common New Mexican saying suggesting that everything can be delayed, however, in Tamarind’s case, it nods to the institute’s spirit of innovation as it reinvents itself for the next decades.