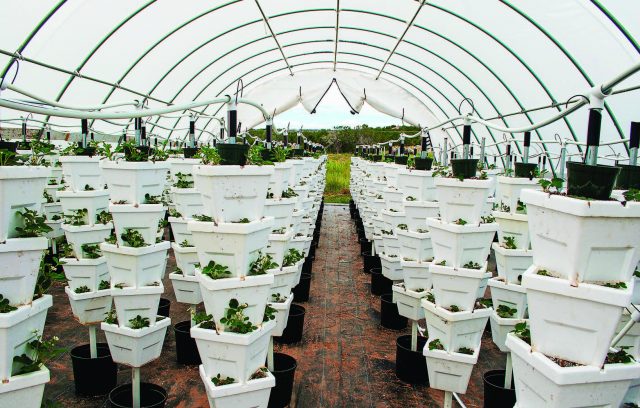 Located 12 feet below ground, in a room about the size of a single-car garage, its walls constructed from dozens of tire bells weighing 1.5 tons each and plastered over with adobe, is the only repository in the United States dedicated to preserving heirloom seeds of Indigenous origin. Corn, beans, and squash seeds are in the majority, encased in glass jars and burlap sacks, but there are also boxes holding packets of various vegetables and culinary and medicinal herbs. Upstairs at ground level are even more seeds—dozens of tins on the floor, hundreds of packets in boxes—all awaiting planting, cataloging, and storage.

This is the Tesuque Pueblo seed bank, established in 2011 under the leadership of the Pueblo’s Agricultural Resources Director Emigdio Ballon. Born and raised in Bolivia, Ballon (Quechua) has been thinking about how to ensure food security for the human race for most of his life. He received his master’s degree in plant genetics in neighboring Columbia and, while pursuing a PhD at Colorado State University in the early 1980s, assisted with research on the viability of quinoa as a cash crop. A few years later he moved to New Mexico, where he helped found the organic seed and food company Seeds of Change and worked with Marsha Mason on her farm in Abiquiu.

In 2005 the Pueblo of Tesuque hired Ballon to reestablish their farming operations. Although individuals had long cultivated small home gardens, the Pueblo had not had a bona fide agricultural program in years. “The people wanted to get back to that,” says Gailey Morgan, the farm’s foreman. “They wanted to bring back edible crops and, of course, our traditional sacred crops—the three sisters of corn, beans, and squash.”

It was a position that suited Ballon’s heart as well as his head. Here, he could put to use not only his decades of scientific knowledge but also a lifelong belief in the interdependence of all life-forms. “In science, we don’t believe in the emotional connection between things,” he says. “But here we have our ceremonies—we pray, we plant, we pray. We are very much in touch with the spiritual.”

It’s an approach that has proved fruitful. The 73 acres currently under cultivation include a wide variety of vegetables, beans, and herbs, as well as apple, apricot, and peach orchards. The food produced is distributed first to the Pueblo’s elders, then to the school, and some of it is used to make fruit preserves, and chile and garlic powders are packaged and sold to visitors.

The seed bank was the next step to ensure the Pueblo’s agricultural independence. “Seeds are life,” Ballon says. But not just any seed, and certainly not the kinds of seed found in most catalogs and garden centers, which are genetically engineered to produce plants whose seeds are sterile and will not germinate.

Ballon set about instead to collect non-genetically modified heirloom seeds from Native American tribes and other Indigenous people. “For thousands of years, they have worked with these seeds, making selection after selection,” he says. These include, among the many hundreds of varieties stored at the bank, Hopi corn and tobacco, Navajo watermelon, Kickapoo tepary beans, and herbs from Africa. All battle hardened, if you will, and containing the genetic material needed to germinate, grow, and sustain life regardless of soil and climate.

Or the availability of technology, which Ballon believes fosters a dangerous dependence on machines and insecticides. “I don’t want to say that technology is not good,” he says, “but, look how certain people live. The Hopi, for instance, and the people in my country, they actually farm on dry land, with no water.”

Ballon and Gailey, along with their two helpers, keep busy with farm duties and with performing germination tests on the seeds before they are stored and labeled with their name, acquisition date, origin, planting date, and germination percentage. With careful storage and regular tests, the seed should keep indefinitely—available for planting on the farm or to Pueblo residents for a small fee.

Ballon believes local agricultural independence is the best way to foster and ensure global food security. “We should have a small collection of seeds in every community,” he says, “because tomorrow might be a problem. We need to start asking, ‘How are people going to survive?’ ‘What is our food future?’ ‘What happens when we go to the grocery store and the shelves are empty?’”

The answer, he says, is in the seeds we save.

PASSION OF THE PALATE: New Frontiers

PASSION OF THE PALATE: Down the Hatch | Raising the Bar | The art and craft of cocktail culture

All Hail the Green Chile Cheeseburger!

Deep in the Heart of Summer, an exhibition of mechanized and...