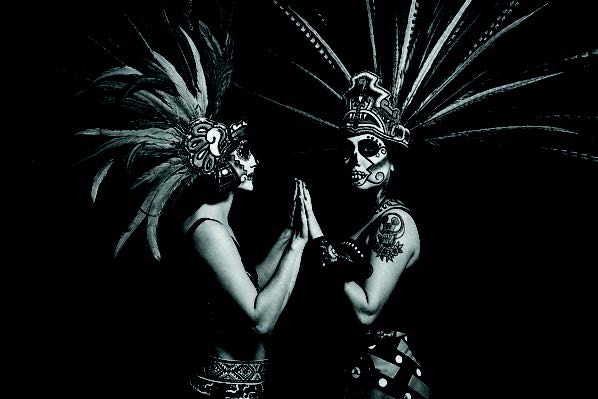 Tapping the Regenerative Power of Art

What would American art have looked like over the past century if every genre had included the viewpoint of Indigenous artists? Start with one art form—photography for film noir posters—and take a look at contemporary Native photographer Cara Romero’s piece, Dans L’ombre (In the Shadows). A young Native woman in a dark alley reacts in fear to something she sees or hears, a threat lurking in the shadows. “What is terrifying her? It could be so many things,” Romero says. “I’m offering that moment for the viewer to connect with what a Native American woman might have to fear in this world.” The dangers, the artist suggests, extend well beyond the stereotypical sinister character with a knife.

Romero, a Santa Fe–based photographer and enrolled citizen of the Chemehuevi Indian Tribe in California, has spent much of her career reimagining American art and culture from the perspective of those who have been invisible to the larger society. Her Native Noir and Americana series are among several approaches that include figures photographed underwater and striking portraits of Indigenous individuals. She works on multiple projects concurrently, propelled by nonstop creative energy and a work ethic that involves printing all her own limited edition archival pigment prints. Her museum prints are frequently scaled at 40 by 60 inches, with some reaching 120 inches wide.

Much of her work, she says, involves “resurfacing our indigeneity in a modern context.” In the case of her acclaimed underwater series, resurfacing refers in part to her tribe’s history of literal and cultural submergence—in 1940 a large portion of the Chemehuevi ancestral land was lost through flooding of the dam that created Lake Havasu.

Photographs such as Havasu (on our cover) reflect a sense of spiritual and cultural re-emergence. The stunning image portrays a young Native woman floating underwater, appearing to ascend toward a source of light. “For my tribe, growing up along the Colorado River, or people along the Rio Grande, there’s such a deep connection to the element of water. When you swim in the river it’s almost like communing with an entity or spirit—there’s a feeling of reverence,” she says. “In the Chemehuevi worldview, women in particular have the ability to commune with land and water.”

Romero’s photograph Gaea speaks of a time when Creation was embodied by Great Ocean Woman and life emerged from the sea. Shot on the California coast and reconceiving the graceful ballerina as a symbol of female creative power in an Indigenous worldview, the artist engaged her daughter Crickett Tiger, a ballet student, as the model. Crickett’s dancewear was created by Romero’s friend Leah Mata Fragua, an acclaimed regalia maker of the coastal Northern Chumash tribe who now lives at Jemez Pueblo. The long Russian ballet skirt is made of bark, with a corset of feathered pelts and hand-shaped abalone shell. The dancer’s crown is topped with feathers and her ballet shoes are painted with red ocher.

Growing up on the California side of Lake Havasu, Romero was surrounded by strong female role models, including her grandmother, who served as the tribe’s chairwoman. The desert landscape and lake were an integral part of daily life, and the tribe’s small population produced a communal feeling and sense of security. “It was like an earlier time, a very sweet, magical way to grow up,” she says. Yet along with a deep sense of belonging and community, her childhood contained the ache of family suffering. She now sees that both aspects helped shape her into who she is today.

When she was in elementary school, her Chemehuevi father and German/Irish mother divorced and Romero moved with her mother to Houston. There, history classes and immersion in American culture reinforced her awareness of her own complex identity and the devastatingly inaccurate portrayal of Native life and history. “I knew from a very young age that there was a stark contrast between my lived experience and what the outside world thought we were,” she says.

This dichotomy led to the study of cultural anthropology at Houston University. There, as a senior, Romero borrowed a camera and took her first photography class. She had no photographic experience, but the instructor had the wisdom to emphasize creative content rather than strictly technical skills. “That was such a blessing. I had so much to say, so much empathy, especially for marginalized people,” she says. In choosing to study anthropology, she believed writing and teaching would become her tools for broadening people’s views and correcting long-standing Eurocentric narratives about North American Native experience. Yet she found she could express herself in a much more powerful, nuanced, and visually beautiful way through the photographic image.

Following graduation Romero continued honing her fine art and photographic skills at the Institute of American Indian Arts in Santa Fe. The experience of living and exploring art with students from dozens of tribes was life-changing. Years later, the bonds forged at IAIA remain strong, she says. “We almost become like another nation, an intertribal art community that doesn’t exist anywhere else.” After attending Oklahoma State University to add digital technology to her photographic skills, she returned to Santa Fe, where she married internationally known contemporary ceramic artist Diego Romero of Cochiti Pueblo.

These days Romero’s award-winning photography is finding a place in top contemporary American art institutions. She is part of a show, Our Selves: Photographs by Women Artists, which opened in April 2022 at the Museum of Modern Art in New York and features 100 women photographers whose work MOMA has recently acquired. She is an invited artist in Water, Wind, Breath: Southwest Native Art in Community, which opened May 15, 2022, at the Barnes Foundation Museum in Philadelphia. And opening June 12, Water Memories, the first-ever exhibition of contemporary Native American art at the American Wing of the Metropolitan Museum of Art in New York, is titled after one of Romero’s pieces in the show. Closer to home, a “life-affirming milestone event” is the opening this summer to showcase the photographer’s own studio and gallery space at the Guadalupe Center in Santa Fe.

“It’s taken me farther than I ever imagined,” she says of her art. “Creativity is renewable and regenerative—it never goes away. Since childhood it’s been my best friend, and it’s safe to say it will take me through all my years.”