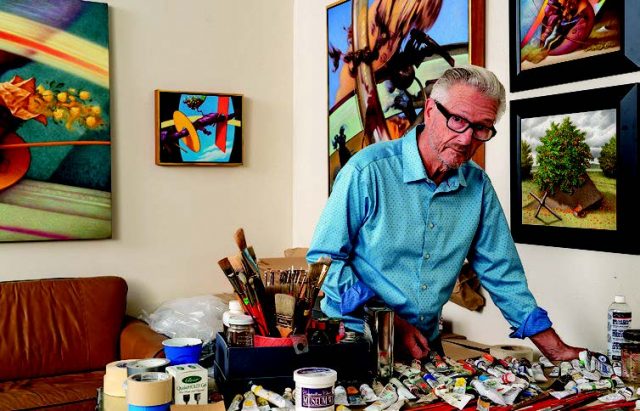 When Mark Spencer says he’s always been unconventional, try picturing this:
a wise-guy six-year-old puffing on a cigarette, hanging out with the members of a hot-rod club—“I was their mascot,” he says—and buying his own Elvis records with money earned from “weird little jobs.” For his sixth-grade science fair project, he was determined not to make a volcano model or ant farm. Instead he sculpted a 12-inch-tall clay seated figure of Julius Caesar, his arm extended and the words Et tu, Brute? written on the pedestal. His science teacher, who fortunately had a sense of humor, gave him an A. The project did involve some science, or at least mathematics, in building the armature. More importantly, it pointed to a free-range imagination that teamed up very early on with a passion for art, a combination that has fueled his creative life ever since.

At 72, Spencer still dips into that intuitive, imaginative well each time he puts pencil or charcoal stick to paper in thumbnail sketches, the genesis of larger color studies and ultimately of every painting he does. In his Pacheco Street studio in Santa Fe, where he has gone every day for the past 23 years, he homes in on a snippet of composition or the vague suggestion of a form he has drawn. “Something might be compelling about it, a little thing going on here, and I’ll pull that out,” he says. At this point in the process he has no narrative in mind, no sense of where the image will go. But as it develops, there invariably comes a moment when he suddenly becomes aware of what the painting is about. “And it’s always the same theme,” he says. “Nature versus human nature.”

Growing up in a semi-rural suburb of Boston, Spencer was a typical 1950s kid who spent as much time as possible outdoors, which for him meant in nature. There were woods and ponds to explore and the bay and ocean nearby. His first commissioned work, at age 12, was a painting of a friend’s parents’ boat on which he had sailed. His first artistic role model was his mom, a mother of five whose feminist impulses clashed with her conventional homemaker role. As a young woman during the Great Depression, she worked as a fashion illustrator for a newspaper, later painting in oils and excelling at drawing. She encouraged Mark’s interest in art, enrolling him in Saturday morning lessons. His father was executive secretary of the Massachusetts Medical Society, publisher of the New England Journal of Medicine. The issues he brought home fascinated Mark with the science, but even more with the pictures. He remembers being struck by electron microscope photos of mesenteric (abdominal) tissue, which later inspired recurring textures in his work.

Among other significant early inf luences: a book on Greek sculpture in his mother’s library and her subscription to a hardbound portfolio series put out by the Metropolitan Museum of Art. Each issue contained a reproduction from art history, Byzantine to Renaissance, which ended up on Spencer’s apartment walls when he attended the School of the Museum of Fine Arts in Boston. As a boy going to church with his family, he listened to Bible stories, more interested in the historical than religious aspects. In his late teens he read Carl Jung and Joseph Campbell and at some point realized that virtually all of art history up to the 19th century was about the mythologies, religious and otherwise, that ref lect and shape human consciousness. “All this stuff was in my head by the time I got to college,” he says.

When he got there he discovered his approach to painting was wildly out of step with the prevailing trends, although that didn’t hamper his style. “It was anathema to do anything with recognizable imagery. I pretty much ignored that,” he says. “I got disapproval from some instructors and approval from others.” He was so skilled at drawing that when he entered his work in the alumni show following graduation in 1971, the school’s dean was convinced Spencer would win the $10,000 top prize and congratulated the young man ahead of time. “But the committee felt they couldn’t give it to me because it was imagery. So they didn’t give it to anyone,” the artist relates, somewhat wistfully. He certainly could have used the money.

While some had little tolerance for Spencer’s art, with its suggestions of surrealism and its classical approach to rendering the figure, others appreciated his work. He began finding collectors even before graduating, including noted collector John Merriam of the John D. Merriam Collection at the Boston Public Library. “John would clear his throat and say to me, ‘I really need to see a springboard for the imagination.’ He needed something compelling and visceral, and he was right. In that way he really helped me think about art, and that has persisted all these years,” Spencer says.

In 1976, the artist made his first of several moves to Santa Fe—over the years he lived brief ly in Boston, New York City, and Los Angeles, returning to New Mexico to stay in 1991. He immersed himself in Santa Fe’s lively and diverse art scene, initially becoming known primarily for his drawings. In 1977 he published a book of drawings, reaching out to a broader audience. “For me, endurance has to do with finding collectors,” he says. “I was fortunate—people either get your work or they don’t, and a lot of people got it.”

Gallery representation and museum exhibitions followed over time, and in March 2020 the Center for Contemporary Arts in Santa Fe presented a retrospective of Spencer’s art. Four days later it was forced to close as a result of COVID restrictions. Those constraints also delayed publicity travel for the monograph Beings: The Art of Mark Spencer, published in 2019 by Fresco Books. But Spencer has seen perseverance prevail, both at the canvas as he watches for a painting’s direction to emerge and in the art world. In 2021 he was named Santa Fe Rotary Club’s Distinguished Artist of the Year, joining such notable former honorees as Agnes Martin, Bruce Nauman, and Tom Joyce.

Indeed, persistence and change represent a major subtheme in Spencer’s art: the ways in which humans are shaped by inner and outer experience as well as genetic predisposition. His Whirlwind series depicts these unsettling forces as tumultuous in both destructive and regenerative ways, although often—as in all his work—with inherent ambiguity and amorphous forms. Much of the symbolism relates to transformation and growth that frees us from the chains of ego, he says. Similarly, more recent paintings, like the 6-foot by 9-foot Tempered, are inspired by the metaphor of fire and transfiguring heat. “I’ve always been fascinated by the crucible where they melt iron and the forge where they make things from it. It’s how we become who we are, and where we’re going,” he says.

Where humanity has been and where we are headed engenders both heaviness and hope in the artist. It’s a struggle between archetypal forces that are at the heart of his worldview and work. “It’s amazing how brutal mankind has been to itself,” he says. “History is the story of human nature, and male domination is the story of history.” At the same time, a particular shape keeps returning in his art as a counterpoint to the darker aspects of our collective experience. It presents itself as a V or Y, as if suggesting a person with arms held high and wide. “It’s that expression of joy, that impulse to something transcendent,” Spencer says. “My deep experience of this life is an ecstatic vision.” Then he laughs and adds, “I’m always trying to get there.”

Deep in the Heart of Summer, an exhibition of mechanized and...