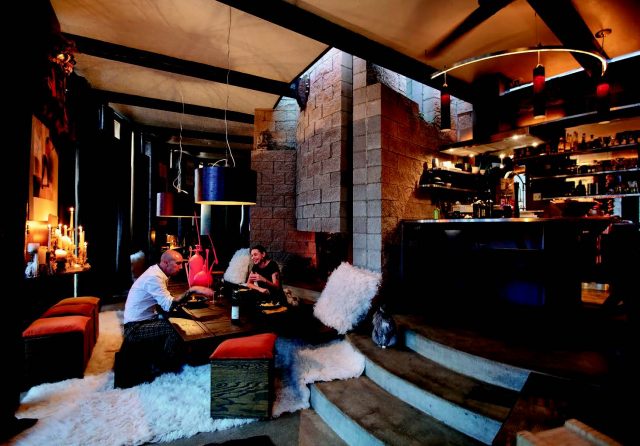 Jennifer Vasher turns everyday objects into works of conceptual art that comment on the hypocrisies and dichotomies laced throughout our sociopolitical landscape. By contrast, the work of her husband, architect Max Vasher, is the conceptual made tangible in spaces where his clients can live in harmony with each other and with the surrounding natural environment.

The Vashers do their thing separately, but together, in the house Max designed and built over the course of two years in Placitas, New Mexico. Intended to accommodate their needs as a couple and as artists, their home is indeed spirit made concrete, nestled in a region whose countercultural history jibes with the individualist ethos of its inhabitants.

Although neither is from New Mexico—Max has family ties in the state but was born and raised in Wisconsin and Florida, while Jennifer is from Indianapolis—they both attended graduate school at UNM. New Mexico has since become home, its architectural vernacular and pioneering spirit a continual source of inspiration for Max, while Jennifer resonates with its “chilled-out” vibe.

The Vashers met at a party in Albuquerque in 2001. After an evening spent deep in conversation with each other, Max left head over heels and Jennifer left town. Two years later, back in the Duke City, she sent Max an invitation to one of her shows with “Remember me?” scrawled across it.

Jennifer, a petite, yoga-fit, early-50-something who charges the air around her with humor and enthusiasm, laughs at the memory. “Max was just supposed to be my boy toy . . . I mean, he is four years younger.” But during a road trip together up to Santa Fe, she remembered something a psychic had told her: Sometimes, a boy can become a man.

They’ve been together ever since.

Tall, lean, and, like Jennifer, a devoted yoga practitioner and Buddhist, Max is the measured calm to his wife’s broad expressiveness. Explaining their artistic temperaments, he says, “There’s that interview Charlie Rose did on creativity with Richard Serra and Chuck Close where they talked about the two different kinds of artists,” he says. “One is the artist who has an idea they just have to express, and they choose their medium and express it, and that’s definitely Jennifer. I’m the second kind of artist, the creative problem-solver. I need that problem, that set of limits. I’d be overwhelmed otherwise.”

But each has always walked a creative path. For Jennifer, it was from childhood forward through a stint at the École des Beaux Arts in Paris, a BFA from Herron School of Art and Design in Indianapolis, and in 2000, an MFA from UNM, a school she chose because a professor told her that while UNM might not guarantee the “right” art world connections, it would teach her how to live the life of an artist.

Her style is interdisciplinary, her media everything from paint and charcoal to the refuse of our consumerist culture. While she cites as influences “material-based” artists like Louise Bourgeois and Eva Hesse, books are her main inspirations. A voracious reader, her work does with sculpture, installations, and drawings what many of her literary idols, like Margaret Atwood and Naomi Klein, do on the page—that is, call things out. “Basically, I’m doing the things that make me go ahem,” she says, clearing her throat in that way that says bullshit. “But I keep Bill Moyers in mind,” she says, “and try to be comparative rather than declarative.”

As such, her work invites multiple interpretations, like the molded rubber “body condoms” from which nude bodies are either emerging or struggling to free themselves from suffocation or consumption; the steel “test tube” injected with gooey layers of motor oil, petroleum jelly, and liquid rubber; and the serene-yet-suffocating space of the installation Spa-alter.

Then there are the pills, millions of them, varnished to shine like little jewels in a number of works, including Entitlement: The Past Is Never Dead and Buried (Tylenol Room). Two years in the making and exhibited from 2008–2011 in galleries throughout the US and in Paris, the installation comprises more than 500,000 over-the-counter pain pills that Jennifer drilled and strung by hand into garlands hung curtain-like around a white chaise lounge. The space is both restful—just let go and take your medicine—and restive, an indictment of the over-medication of society, our insistence on a pill for every ill.

Power Pumps and Super Sprays: Weapons of the Anthropocene also bites. Exhibited at Richard Levy Gallery in Albuquerque from August through September 2021, it features the familiar shapes of cleaning products and cosmetic containers turned into surreal vessels of what Jennifer calls the cult of cleanliness. With their candy colors and surfaces as airbrushed as the complexion of an Instagram influencer, they evince a humorous, sci-fi absurdity. But recalibrate your attention and they exude menace, medical instruments culling all that is unclean, never mind the damage to our mental and environmental health.

Although created long before COVID-19 hit, Jennifer is aware of how the work might also be interpreted post-pandemic, and she’s fine with that. “It’s okay to be provocative, it’s okay to question. That’s what artists do.”

In some cases, they can offer solutions. “Whereas Jennifer says, ‘Hey, look, we need to reflect on how we’re acting here,’ I try to come up with the solutions that stop us from acting that way,” Max says. “Maybe it’s our architecture, which I feel strongly influences how we interpret and react to the world.” Specifically, the myriad ways in which most residential architecture boxes us off from each other and from the environment, something about which, like Jennifer, he is passionate.

Fascinated by architecture since childhood, which was spent in Chicago, Michigan, and the Sarasota/Tampa region of Florida, Max started working construction after high school, eventually scoring a gig as part of the concrete crew at the Great Stupa of Dharmakaya at the Shambala Mountain Center in Colorado, where he became captivated by the interaction of architecture and landscape. A move to New Mexico in 1993 prompted him to apply to UNM, from which he graduated with a bachelor of science in anthropology and a master of architecture in 2005.
To feed his architecture habit post-graduation, he started tattooing. It was a way, he says, to hone his drawing, design, and client interaction skills while keeping himself from becoming a CAD slave in an average architectural office. Instead, he bugged one of his idols, Bart Prince, for a job.

Max worked in the iconoclastic architect’s office for two years before transitioning to assisting Prince as a private contractor on construction repair and architecture model-building projects. Prince solidified for Max the idea that “architecture is not the stuff that falls off a building in an earthquake. It’s the creative expression of space achieved through creatively engineering a whole standing structure.” He also learned the importance of extensively interviewing the client, understanding their problems from the start, and creatively solving those problems.

For Max, that involves mixing the tenets of modernism, with its emphasis on clean lines and innovative construction materials like steel and concrete, with those of organic architecture, which urges the use of sustainable materials and processes, passive solar heating and cooling, and the harmony between design and the surrounding natural environment.

Like Prince, Max’s base of operations is his own home, which allows clients to engage directly with the architect in the space he designed in part as a three-dimensional calling card. The decision to build in Placitas was a no-brainer, in part because there are no building restrictions in their neighborhood and also because it was familiar territory for Max since his mother ran a bed-and-breakfast there for many years. Most importantly, though, they connected at an emotional and philosophical level with the community’s DIY spirit. “There is this pioneering history here,” Max says, “from the Spanish who lived here hundreds of years ago to the ’60s hippies who moved here and built houses in response to the environment.” That culture, that determination to live as they chose at any cost, is the spirit the Vashers promote in their art and in their life.

Naturally Max built their home himself, applying his construction knowledge to everything from site excavation to concrete work to furniture design and manufacturing. Christened Jin Zhu, from the Chinese for “garrison,” it is as solid as the concrete block out of which it is constructed, yet airy and light-filled, thanks to the bank of curved glass walls set along the south side of the long, open space that holds the living and bedroom areas, which afford maximum unobstructed views of the great outdoors as well as maximum solar gain during the winter months. An open kitchen allows Max to commune with Jennifer and their guests while he cooks, while their studios, situated at opposite ends of the house for privacy, are the individual sanctums to which they retreat to make their art.

Differing artistic temperaments aside, the Vashers are simpatico when it comes to the ongoing project that is their marriage. The key to their longevity as a couple is establishing rituals, one of which includes starting their day together with coffee and conversation. This allows them to gauge how the other is doing in general and how to approach one another that day, and to retreat into their respective studios without feeling like they’ve ignored each other.

These confabs are invaluable in other key ways. “We talk about what we’re working on that day and what we hope to accomplish by the end of the day,” Max says. “There’s something about verbalizing goals to someone else that makes you accountable to completing them. Since we work alone in our studios without the input of others, this becomes essential—we’re each other’s studio partners. I need her brain to help influence my creativity and she needs my brain to figure out how some of her ideas will work in the real world.”

And while they live garrisoned from the hustle and bustle of the city, the digital era has been another boon to their practices. “That decentralization,” Max says of the online world, “brings the city into the country.” It has also allowed them to touch audiences the size of which would not have been achievable in an analog world. No doubt social media is the new frontier of creative expression, affording endless freedom to the 21st-century do-it-yourselfer. “The philosophy of American democracy and the right of us all to choose our life path—that’s integral to a life well-lived,” Max says. “That’s what we’ve built here.”

FUNCTIONAL DESIGN FOR A NEW ERA